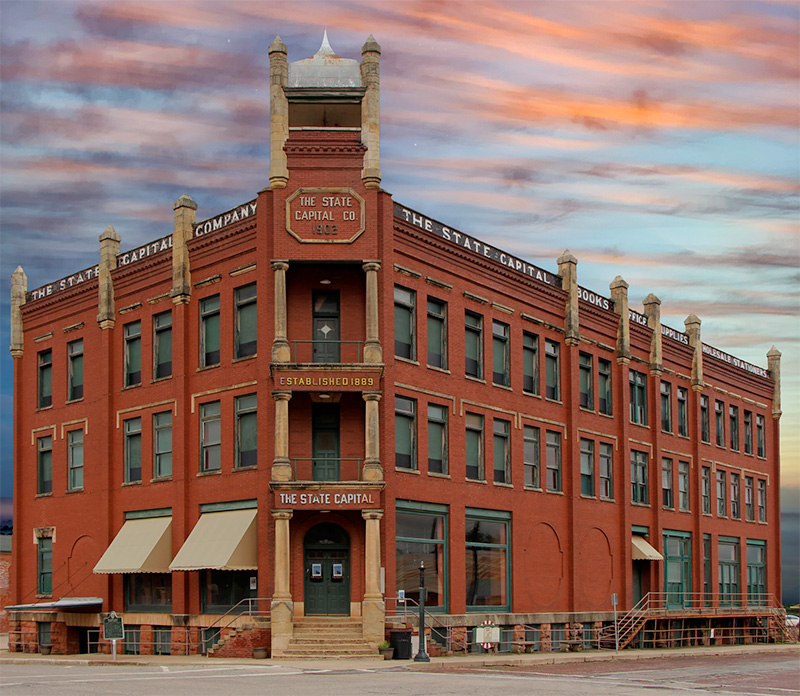 ​The State Capital Publishing Museum is one of the most significant historical buildings in the state of Oklahoma. This beautiful building is on the National Register of Historic Places. It was here on November 16, 1907, that President Theodore Roosevelt sent a teletyped message congratulating Oklahoma Indian Territory for becoming the 46th state in the Union.

The building is located at 301 West Harrison in Downtown Guthrie, OK.  Building size is estimated at between 39,000 square feet and 50,000 square feet – the figure that the first owner, Frank Greer, claimed upon completion in 1902.

The building, often confused as being the first “State Capitol” building, never served as the Capitol for the State of Oklahoma, during the territorial days nor Statehood.   The confusion comes from the name of the newspaper.   Frank Greer operated under the business name of “The State Capital Company”.  Note the “a” instead of “o” in the name.   A building that serves as the meeting place for the legislature is normally referred to as the Capitol.  The City that serves as the Capital is spelled differently.

Frank Greer operated the first Newspaper in Oklahoma Territory, although in the early days it was actually printed in Kansas, starting just before the land run.  He eventually moved into the McKenna Building, a wooden structure that sat just south of the location of the current building.  The McKenna Building was destroyed by fire on Easter Sunday morning, March 30, 1902.

Greer, already the owner of two lots to the north of the destroyed McKenna Building, was determined to build a much grander structure to house his printing enterprise.  With much help from the citizens of the still relatively new territory, the current structure, designed by renowned architect Joseph Foucart, was completed and open for business by the end of October 1902, less than seven (7) months after the previous structure had burned to the ground.  Although disputed by some, Greer claimed he could print 30,000 newspapers in one hour, once everything was in place. 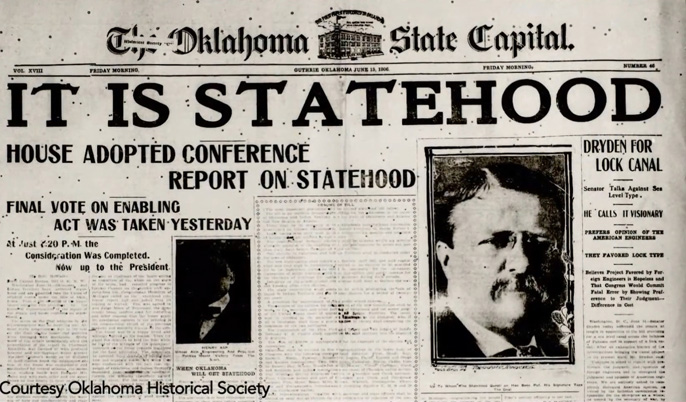 At the time, it was the largest dedicated printing facility west of the Mississippi.  In 1906, the National Newspaper Editors Convention was held in the new facility.   On November 16, 1907, President Teddy Roosevelt sent a telegram that came over the wire on the second floor of the building, and Oklahoma statehood was announced from the second-floor balcony.  Guthrie, which has served as the Territorial Capitol continued as the new State Capitol of Oklahoma, for a while.

The building did not serve just as home for Greer’s newspaper.  Virtually all the preprinted forms used by courts and county clerks throughout Oklahoma were printed in the building.  In the first-floor lobby, there are 620 drawers on the south wall that still hold many of those preprinted forms; everything from marriage licenses, deeds, and mortgages, to other civil, criminal and probate forms.  Many of those forms survive today.

Greer was a controversial and sometimes divisive personality.  His divisiveness may have been a major factor in moving the Capital from Guthrie to Oklahoma City in 1910.  Regardless of whether he was a driving force, the move proved devastating for him personally.   Shortly thereafter, his newspaper business was going bankrupt.  As a result of the bankruptcy, the building was sold to a group that operated as the Cooperative Publishing Company.  It was operated under that name into the 1970’s, printing books, selling printing supplies, and furnishing forms for courts and clerks.

By the mid 1970’s the building was in a sad state of repair.  It was privately owned by a woman who reportedly lived on the top two floors with her two large dogs.  It was, however, still a printing facility.  Local citizens, concerned that the beautiful structure might be lost to history, began a movement toward preservation.  They raised money to purchase it from the private owner, who deeded it to the Guthrie Chamber of Commerce, who then donated it to the Oklahoma Historical Society to be used as a museum.

OHS began the enormous task of preserving the building.  After rehabilitating most of the first two floors, the building was opened as a museum in 1982.  No effort was made to rehabilitate the top two floors due to funding issues.   The roof was replaced in 2003, which finally stopped further water damage to the top floors, but existing damage is extensive.  It was always a “three-season” museum.  The only climate control was an antiquated boiler system, feeding old fashion radiators, as the building has never had a modern HVAC system.   In 2012 the boiler broke down and was deemed irreparable.  As with most state agencies, the budget at OHS had been nearly cut in half, and the estimated cost to replace the boiler was simply out of reach.   The building was closed in 2012. 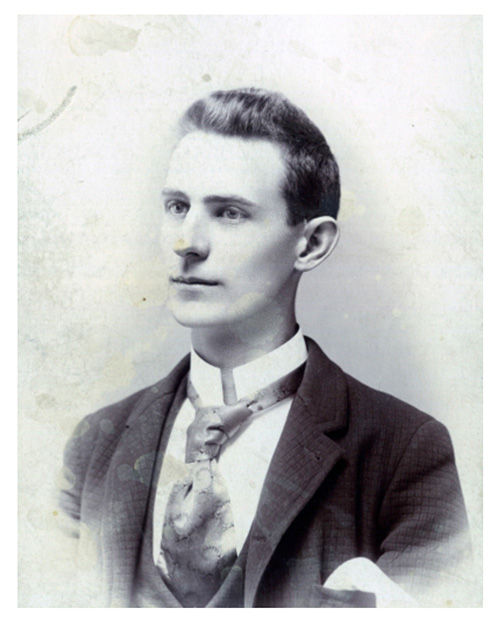 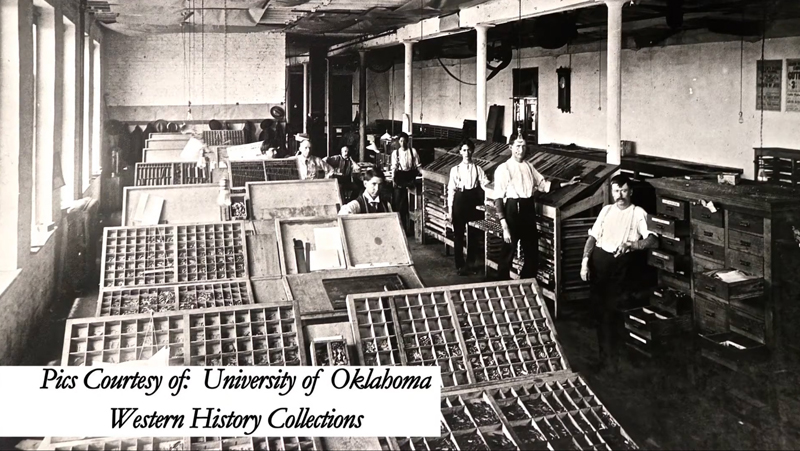 After some shifting in state government, the State of Oklahoma almost forced OHS to sell the building to a developer with plans to convert the building into affordable senior housing by using low income housing tax credits (LIHTC).  Fearing that much of the rich history of the building would be lost forever, concerned citizens from all over the state of Oklahoma began a concerted effort to stop the conversion.  A coalition of private citizens, City Council, the Guthrie Chamber of Commerce and others successfully negotiated a deal which allowed the current owner (/dba The State Capital Publishing Museum) to take title to the property, along with the historical contents, on June 27, 2018.  As part of that deal, The State Capital Publishing Museum has committed to spend (in dollars or fair-market labor) a minimum of $262,000 towards repairing, preserving and restoring the building by June 27, 2023. This amount was agreed upon based on two assessments of the building’s current worth. That “initial” investment of $262,000 represents a fraction of what it will take to completely restore and renovate the building.

It will take an enormous investment of capital and labor to accomplish the long-range goals for the building.  At the beginning of the negotiating process, OHS President, Dr. Bob Blackburn was clear that he was taking “the long view” of the building’s future.

This plan sets out the road map for accomplishing the first steps towards repair, restoration, and preservation with the long-term goal of having the building open as a Museum.

Additional use has yet to be determined, but the State Capital Publishing Museum Board understands the need to develop a sustainable and steady source of income to support the Museum and the building long term.